Christmas down under style 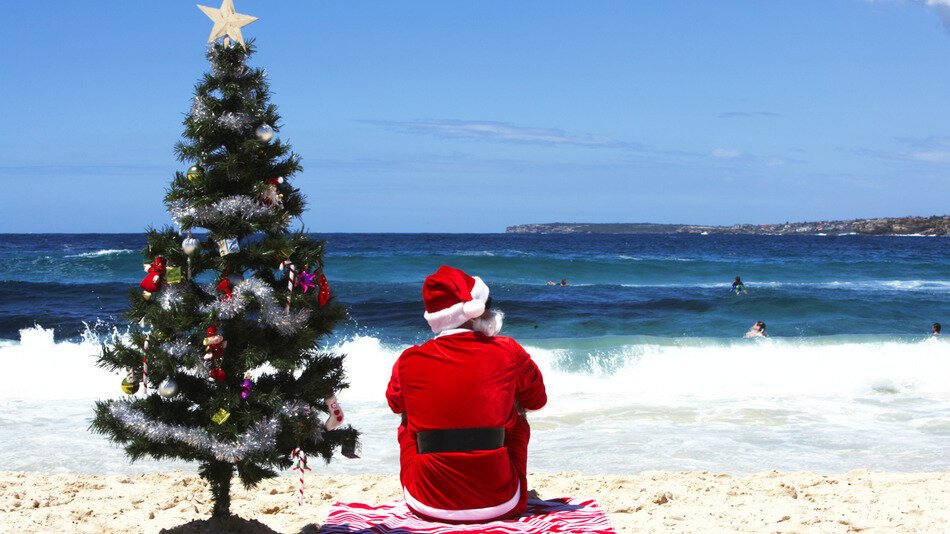 For those of us in the land down under, it’s beginning to feel a lot like Christmas. Yet what we call Christmas in Australia may, to our friends in the Northern Hemisphere, seem just a little weird. As the days get shorter, darker and colder on the other side of the world, our days are getting longer, warmer and lighter. Yet in a true Australian paradox, we still cling to many wintry Christmas traditions.

Dreaming of a white Christmas

We nostalgically dream of a white Christmas (even if we’ve never experienced one) and sing about ‘walking in a winter wonderland’ or ‘dashing through the snow in a one-horse open sleigh’. Our beautiful local carols are probably closer to the truth when ‘The north wind is tossing the leaves, The red dust is over the town; The sparrows are under the eaves, And the grass in the paddock is brown’ (The North Wind, words by John Wheeler and music by William G James). Or when we’re  ‘Dashing through the bush, in a rusty Holden ute; Kicking up the dust, Esky in the boot’ (Australian Jingle Bells).

Christmas lunch with all the trimmings

Perhaps our obsession with winter and snow is because we still feel just a little bit cheated of a ‘traditional’ Christmas. For many Australians who celebrate Christmas, regardless of their religious beliefs, Christmas dinners (lunches) are still about all the trimmings – ham, turkey, Christmas pud with brandy butter, and wearing silly hats. But with climate change and scorching heat, it makes more sense to eat cold prawns, cold ham or turkey with salad and the classic Australian or New Zealand – depending on whose side you’re on – pav.

With travel being on-again off-again for a second year thanks to COVID, many of us will be enjoying the pleasures of Christmas at home. We’re likely to be donning the thongs and togs and lounging by the pool, cooling off in the surf, or flaking out under the fan or air conditioning.

The team at Concise Writing Consultancy wishes you all a happy holiday season and a 2022 of change for the good.

We love Australian words which is why we packed this blog with them. Brush up on your Australian English here:

boot (of the ute, not Santa’s footwear): a place for luggage, usually at the back of a vehicle. Also called a ‘trunk’ (US).

down under: another name for Australia as described in Men at Work’s 1981 song Down Under.

Esky: portable, insulated cooler to keep your drink and food cool once filled with ice. It has a clip-on lid and a handle. Esky® is the trade name for the original Australian-made product but the term is often used in the generic sense to refer to a portable cooler.

Holden: Australian motor vehicle manufacturers. Starting out as saddle makers in 1856, the Holden became the much-loved and iconic car of Australia. By 1958 in Australia, Holden was outselling the nearest competitor by two to one.

paddock: fenced or enclosed land usually part of a farm, or a sheep or cattle station, and used for rural production.

pav: (short for pavlova) a dessert made of a large soft-centred meringue filled with whipped cream and topped with fresh fruit.

thongs: plastic or rubber flat-soled sandals held loosely on the foot by two strips of plastic or rubber passing through the first and second toes and over each side of the foot. Also known as ‘flip flops’ (US).

ute: (short for utility) a type of motor vehicle similar to a pick-up truck but smaller. Holden began making utes in 1951.